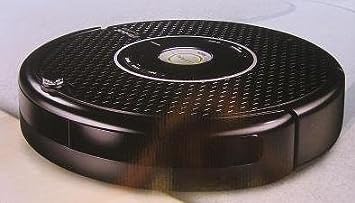 We got our Roomba 551 about three years ago with some Costco cash from my insane American Express purchases (running your own business = lots of Costco Cash at the end of the year.) It was initially purchased as I figured I would return it if I didn’t like it, it’s now become the only thing that stands between us and a cat tumbleweed ranch.

I figured I’d do a review on TheITbaby for a few reasons – one, I think this particular device deserves the good graces of my review, and two I did not know there were unique baby challenges that one would face in the ownership of one of these things.

The Roomba 551 is a robot vacuum cleaner. This particular model of it lets you set the days and times you want it to wake up and clean the house.

For us, it comes on at 3pm every day except for Sunday when it wakes us up at 10, and wanders around cleaning the place, annoying the cats, building a new stronger cat in its vacuum chamber.

It works by mostly blindly bumping around for a long time. What you could accomplish in about five minutes, the Roomba 551 gets done in a bit over an hour and a half. This isn’t a bad thing however as the Roomba uses very little electricity relative to a normal vacuum cleaner, and it runs when you’re away so you really don’t need to be annoyed as it bumps around for a couple of hours cleaning.

One of the things I did not expect after having a Roomba for years is that baby stuff is a Roomba’s kryptonite.

Specifically in my house, the Graco Comfy Cove Swing seems designed with a Roomba catcher built right in. Roomba will beach itself on this about one out of three times cleaning.

The Fisher Price Deluxe Bouncer, besides being a toe-destroyer, contains a curve that a Roomba 551 can’t escape. If that thing is on the floor, I’ll find the Roomba stuck in it.

While neither the baby nor the cats are afraid of the Roomba, the cats give it a wide berth. In general wherever the Roomba can get there is no cat hair, but there’s a lot of places the Roomba can’t reach, and every now and then we realize this and have to break out a trash bag and a torch to remove an incursion of kitty hair.

It’s not quite what you’d expect. It’s not perfect. It’s far from perfect. You expect you’ll have a clean floor every time you get home and it’s something that will take the work away. This isn’t the case.

What I’ve learned in the past few years is that the Roomba is significantly more work than a regular vacuum – at least when you’re dealing with two cats. There’s emptying the nearly full bin every day, cleaning the brushes at least once a week, and the nightmare scenario of cat and kid – cleaning up a wet Roomba.

While it’s generally cat hork you have to worry about, if you’re dealing a kiddo, anything is possible.

I quickly discovered I was using a multi-tool to take the thing apart weekly, and after a little over a year we wore out the gears on the first gear box. This right after I had purchased a new battery because the initial battery that came with it started only lasting half an hour, and that was far too little time for the thing to make it back to base camp.

Owning this thing is a dirty dirty proposition, however it’s one I would make again. There’s something about coming home and not having a cat hair-littered tumbleweed farm that’s nice. If you have allergies, you’ll start noticing that the amount of dust a bumbling robot picks up after a couple of hours is considerable.

You’re not going to get rid of your vacuum with this, but it’s a way you can go from having to vacuum every day to having to vacuum once every couple of weeks. It’s good, not perfect, and worth it to me. Your mileage may vary.

I ran into the Roomba guys in Las Vegas and am told that the new Roombas have something that prevents cat hair from getting into the gear assembly and that some tweaking has been done to the logic. I don’t know as I don’t have the money to buy a newer model, I just keep fixing my old one up.

They also had DJ Roomba from Parks and Rec there and I got to get my photo with it, which for me was a geeky moment to remember.

It may be overkill if you don’t have a sheddy cat or dog or a dust/cleaning problem. It’s also not useful if you’re a hoarder and you can’t see your floor.

The iRobot Roomba 550 / 551 is available from Amazon for $299.96. Replacement parts are also available and generally are not hard to install a couple of years after purchase.